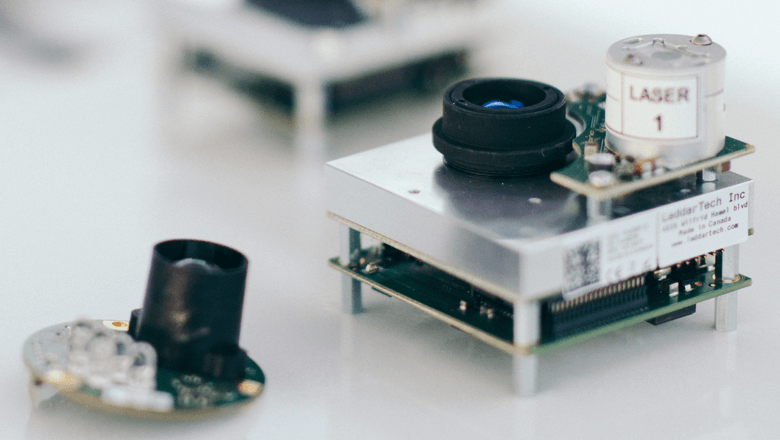 Lidar enables self-propelled vehicles, such as AGVs, to map the surrounding area. They scan the environment with light pulses. Despite to the simplicity of this optical sensor technology, the technology remains pricy. Sensor developers are innovating to make autonomous driving more affordable, compact and reliable. This makes autonomous driving more accessible to consumers and B2B markets.

Affordable alternatives enter the market, such as solid-state lidar. Depending on the desired resolution, you decide whether your application requires a simple or a high-end member sensor. Moreover, a just sensor is not enough to drive autonomously. For a reliable measurement you need to combine several techniques.

Instead of radio waves, lidar transmits pulses of light, which are reflected by objects and surfaces back to the sensor where it is received by detectors. The system calculates how long it takes the light to get back to the sensor from the originating source and converts those time stamps into distances. A detailed point cloud of the surroundings is generated from all the distances.

What determines the price of autonomous vehicles?

The lidars on Google’s Waymos, for example, are electro-mechanical scanning systems. They contain a range of mechanical moving parts, which adds to the complexity of assembly and miniaturization, and also affects the sensor’s robustness. Their price points remain high, despite increasing competition. Mechanical scanning lidars cost from many thousand dollars for lower performance modules to tens of thousands per module for the more sophisticated options.

But there’s much more technology involved for your car to be truly autonomous, and overall system cost of today’s prototypes can easily rise to well over 100 thousand dollars. Needless to say, this is not really within the budget of the average consumer. 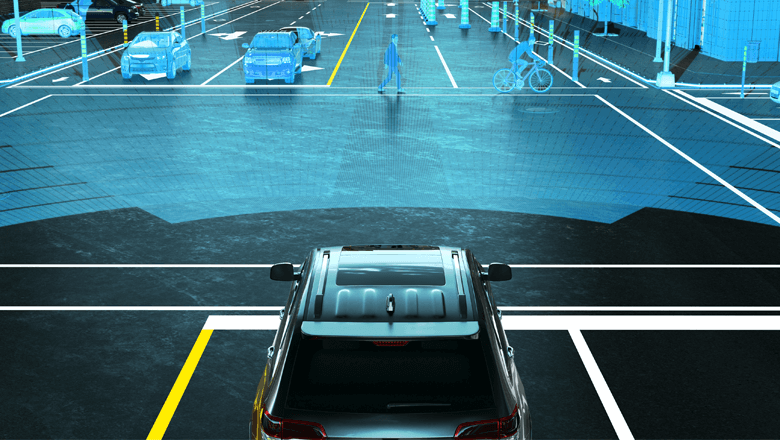 Originally lidar arose from the words ‘light’ and ‘radar’. It is now an abbreviation of ‘light imaging, detection and ranging’.

Luckily there’s an alternative to expensive mechanical scanning lidars: it’s called solid-state lidar. This technology uses wide-beam flash illumination, instead of collimated laser beams: a solid-state laser emits pulses of light that are spread across a wide field of view (typically between 9 and 120 degrees) by means of a diffuser.

This field of view is less than scanning lidars, which can scan up to 360 degrees, but their build makes solid-state lidars much more affordable and significantly more robust. For example, you can buy a flash lidar module from Canadian-based LeddarTech for only a few of hundred dollars. Because they are also much smaller than their mechanical scanning counterparts, it is relatively easy and inexpensive to integrate them unobtrusively into various places in a car.

Scanning lidar does have certain advantages over flash, however. “If you need high resolution, you have to look at higher-end lidar sensors”, says Marco Leeggangers, Operations Director of Sentech. “Scanning lidars also achieve a high resolution across their entire range of 360 degrees.”

The frequency and the intensity of the laser pulses used are a well-kept secret of lidar manufacturers. “You can fine-tune the lidars at the design stage to adjust the range or the angle of the lidar. Several software parameters can be adjusted to meet customers’ needs in terms of range and refresh rate. That’s how we distinguish ourselves from the competition”, Oliver Grenier-Lafond, distribution network manager at LeddarTech, mentions.

He is able to reveal the laser’s wavelength: “Our sensors on the market today use light around 905 nm (nanometers). A lot of competitors are above a thousand nanometers. While lasers in the 1550 nm window may be more powerful, the optical components in the 900 nm window are less expensive, more robust, and more reliable. We have developed advanced signal processing algorithms that enable us to drive the same level of performance as our competition.

Reducing interference with rain and snow

Operation in challenging environmental conditions is a sensitive topic when it comes to safety-related vehicular and mobility applications. After all, the lidar sensor’s measurements are being translated into usable input for the next step, the perception platform that recognizes and classifies objects. “It’s precisely in that step that LeddarTech is very strong”, says Leeggangers. “The Canadian signal processing software is incrementally good at reducing interference. Even at night, with rain and snow, it still generates reliable images.”

Vincent Racine, product manager at LeddarTech, adds that: “Each detection technology have strengths and limitations, depending on the application and situation. Lidar measures in all light conditions the distance very precisely, and it also copes very well with both static and moving objects. Our off-the-shelf lidar modules have a precision of five centimeters, with repeatability of six millimeters.” 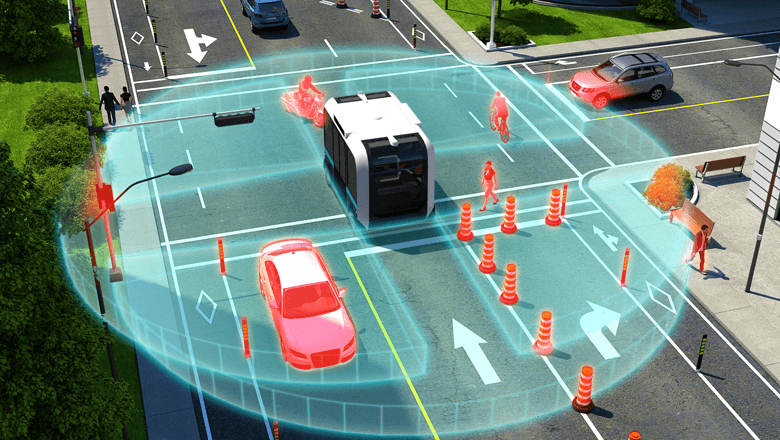 LeddarTech’s technology is powerful enough to detect objects from a great distance. “At CES 2019, we successfully demonstrated that our technology enables a detection range of up to two hundred meters for objects like a pedestrian with a 10% reflectivity”, according to Racine. “For higher reflectivity objects, like a car’s license plate, we can see them from even further away.”

The distance range is, of course, dependent on the intensity of the laser; the more power, the further you can see. You can’t keep increasing the power, however, because the lasers are being used in public areas and must remain safe to the human eye.

“Safety norms are very important, and our sensors must meet the strict legislation for laser safety”, Racine says. “With our software, we ensure that we achieve an optimal performance within those limits.”

There is a virtual consensus in the automotive industry today (with the exception perhaps of Tesla’s Elon Musk, which doesn’t use lidars yet) that you can’t build a completely autonomous car without leveraging lidar technology. In Leeggangers’s opinion, “Never in a million years will it work with just one type of sensor. You must combine lidar with cameras, GPS, and other technology. Only then do you get a reliable measurement.”

Leeggangers has to look further ahead, because completely autonomous cars are still, for the most part, in their research phase. “The market for autonomous vehicles is booming”, he says. “Such as on Maasvlakte 2, an extension of the port of Rotterdam, vehicles drive around independently on a closed and familiar terrain. You also see more and more autonomous vehicles in controlled environments such as in large warehouses and in agricultural fields.”

There are plenty of opportunities for solid-state lidar in many of those mobility applications. For example, you can also efficiently use the technology, for example, to analyze and detect motorists’ lane changes such as in the event that a lane is closed. 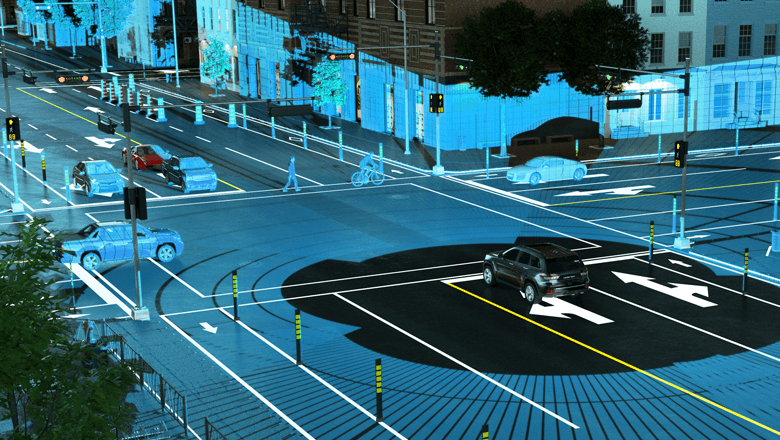 LeddarTech is currently working on a number of innovations, including multiple 3D variants of their technology. Racine mentions: “We started with 2d lidars. They are fine for simple collision avoidance applications, for example. But with 3d lidars based on what we call the LeddarEngine, we can provide more resolution and performance, so you can see more details and recognize objects more easily. The technology is being developed rapidly to meet the needs of automotive and other mobility applications, including autonomous shuttles, robotaxis, and commercial vehicles”.

As for long-range and high definition 3d lidars, they are also being planned. “We are working on various lidar designs based on our new LCA2 and upcoming LCA3 LeddarEngine, which integrate many core lidar functions into systems-on-chip, that leverage microelectromechanical system (MEMS) technology. Although MEMS micro-mirrors technically contain moving parts, you can still classify them as solid-state, because of their small size and simple, robust design making very resistant to shocks and vibrations”, Racine explains.

Sentech saw that lidar technology was developing rapidly a couple of years ago, but the mobility market wasn’t ready for high-end sensors such as scanning lidar. So, the company from Nieuwkuijk looked for an alternative. In 2016, Sentech sought out the solid-state lidars from LeddarTech, which was in the process of refocusing its development activities to meet the emerging requirements of the automotive market.

“LeddarTech was looking for a company that could offer its clients a high level of support, especially during the clients’ development and integration stages”, Grenier-Lafond mentions. “We also have specialized partners in various regions, including Germany, France, and Asia. The Netherlands is a dynamic market with a lot of innovative companies to which we want to provide superior service and support locally”.

Leeggangers states: “Lidars aren’t simple systems. You always have to integrate them in other hardware and software. They produce a lot of data that you must translate into usable information with complicated algorithms. This is where Sentech can help. We can also advise on where the sensors should be placed, and the types of images that they will produce. We often put our experience with radar to use in this way because the technologies and applications have many similarities.”

How to integrate lidar in your vehicle?

How do you start with the integration of lidar? There are several lidar technologies on the market. The speed of the vehicle and the reflectivity of environmental objects determine the required field of view. Therefore what technology is needed to make your vehicle drive in complete safety and autonomously.

In this 5-step plan you can see what a lidar integration process looks like.

This article was published in Mechatronica&Machinebouw nr.2 2019 and is written by Alexander Pil

"The market for autonomous vehicles is booming. In many mobile applications there are plenty of opportunities for solid-state lidar!" 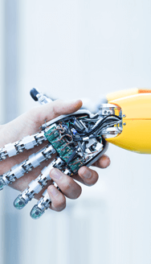